The town of Sansepolcro

Located the foot of the Tuscan Apennines, Sansepolcro overlooks the Upper Tiber valley, which forms a vast amphitheatre of hills and mountains encircled by the Alpe della Luna mastic, the Massa Trabaria, the hills of nearby Umbria, the Aretino mountains and the Catenaia Alps.

How to reach the city of Sansepolcro

Tradition lends Sansepolcro a legendary origin thanks to two pilgrim saints, Arcano and Egidio, who, returning from the Holy Land, stopped in this valley, where they received a sign from God and decided to build a small chapel to contain the holy relics they brought from Jerusalem. 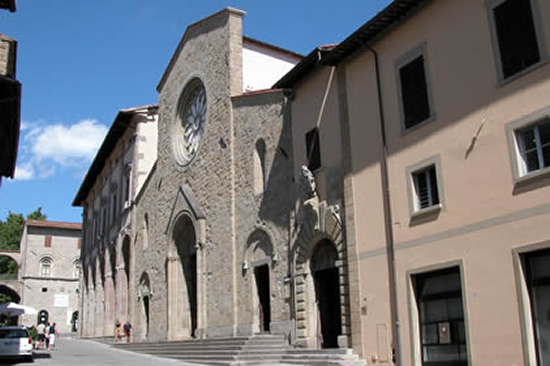 Around this early oratory a town grew up, named Santo Sepolcro for this very origin. In the ancient annals of the town, Sansepolcro was named as the "New Jerusalem".
A feud of the Camaldolese friars in the late Middle Ages, Sansepolcro became a free comune in 1163. As a border town, it defended itself against invaders from Castile, Perugia and Areto.
The town was ruled first by the seigneury of Uguccione della Faggiola, then the Tarlati family and, later, the Malatesta.
For a brief period it was under the rule of the popes and then from 1441, was part of the territory of Florence, from the Medicis to the Lorraines, until the unification of Italy.
In 1520, Sansepolcro was made a city and named as the bishopric of Pope Leo X.

Sansepolcro's period of maximum splendour was between the 14th and the 16th centuries.
These centuries, rich in culture (from woad to textiles), art and culture, are evidenced by the historic centre of the town. Enclosed by a city wall punctuated by Bernardo Buontalenti's defensive towers and the impressive Giuliano Fortress designed by Sangallo, the historic centre of Sansepolcro consists of a series of beautiful medieval buildings with distinctive towers, today truncated, and Renaissance palaces (Palazzo delle Laudi, Palazzo Alberti, Palazzo Aggiunti, Palazzo Graziani, Palazzo Ducci del Rosso,…); churches (from the Romanesque cathedral to the gothic church of S. Francesco) with their typical bell towers; and exquisite architectural features.

The town centre has been affected by a series of earthquakes, attack by outsiders and battles between the different quarters of the city, but has nevertheless preserved its original character and its deep ties with its most famous son, Piero della Francesca.

The painter, who signed himself "Pietro dal Borgo", immortalised his hometown in his work, glorifying its attributes as approaching the ideal city then much discussed in Italian courts.

But Sansepolcro is more than just the birthplace of Piero della Francesca: its rich artistic and cultural history is also linked to Dionisio Roberti, Luca Pacioli (one of the greatest mathematicians of the Renaissance, a pupil of Piero della Francesca and a friend of Leonardo da Vinci), Matteo di Giovanni, Raffaellin dal Colle, the Albertis, Santi di Tito and more. 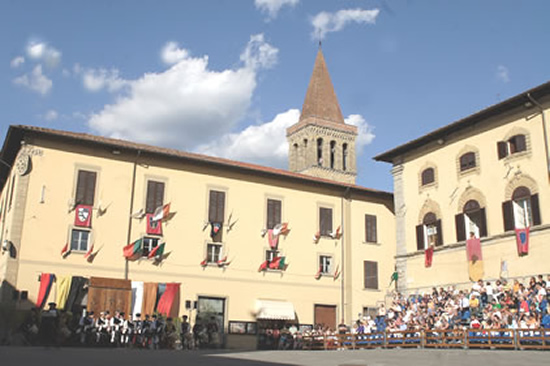 Alongside the town's artistic heritage is its folklore. Sansepolcro is the birthplace of the Palio della balestra and the Giochi di Bandiera (flag-throwing),evidence of past battles to defend the town's freedom.

On the second Sunday in September, when the crossbowmen of Sansepolcro renew their challenge to their rivals in Gubbio, the town is steeped in the atmosphere of Piero della Francesca: the clarions blare, the drums roll and Piazza Torre di Berta is the triumphant scene of the Palio della Balestra: a centuries-old festival (originating in the 15th century) which recalls Sansepolcro's proud history as a free town, constantly defending itself from attack by neighbouring lords. This military past is the origin of the shooting competition using antique Italian crossbows and benches, which continues to this day with the same rules as ever.

Seated on wooden benches 36 metres from the corniolo, or target (a conical stand with an iron plate at its centre), the bowmen - chosen by lot - take turns to shoot. The winner is the nearest to the centre of the target. Noblemen, ladies and knights dressed in Piero della Francesca inspired costumes watch the competition, while flag-throwers launch their banners high in the air.

September is the most important month of the year here, and not only because of the Palio, held in honour of the town's holy founder, Saint Egidio. Two ther major events take place in alternate years: the Biennale of Goldsmith Art and the International Lace Biennale, celebrating two important local traditions with combine art and artisan excellence. 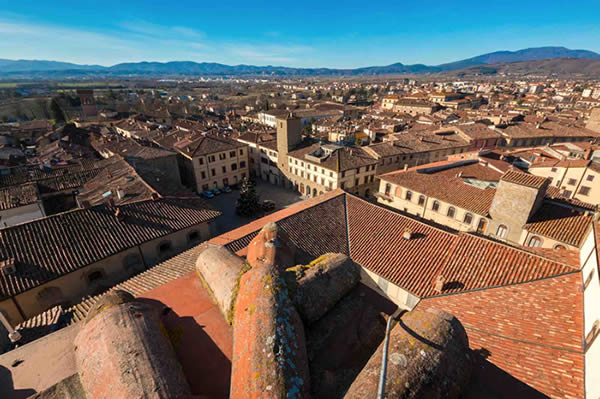 Today Sansepolcro is a busy modern town with some 15,600 inhabitants which, while committed to protecting its noble past and traditions and its identity as a unique place, also looks to the future.

The town's industrial development began in 1827 with the founding of Buitoni, a major food manufacturer which became an international company and today has a state-of-the-art pasta factory in Sansepolcro. Alongside this, the town's economy is characterised by prestigious manufacturers of shirts, knitwear and textiles.

The industrial base is joined by an agricultural sector based primarily on high-quality tobacco, as well as bell peppers, tomatoes, sunflowers and cereals including wheat, maize and barley. In recent years the area has developed the cultivation and marketing of officinal herbs, along with a growing focus on clean agriculture, making the Valtiberina area a "green valley".

By train:
Line: Rome-Milan, to Arezzo and bus link to Sansepolcro.

By car:
A1 motorway (Milan-Naples), Arezzo exit at Battifolle.
From Arezzo continue on the SR 73 Tiberina to Sansepolcro. 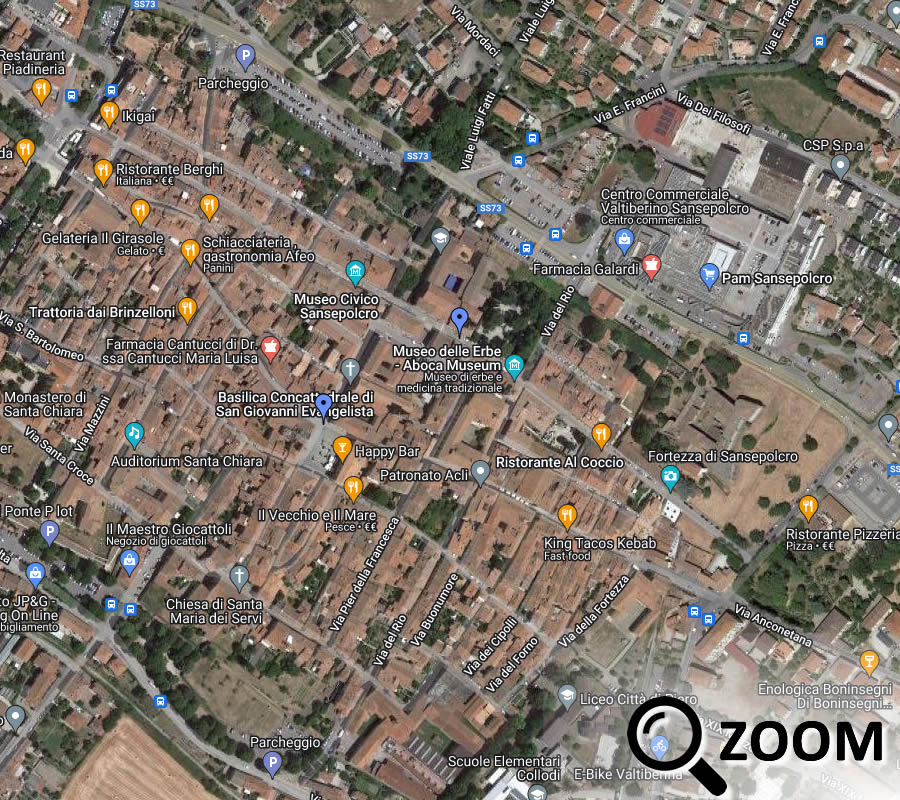